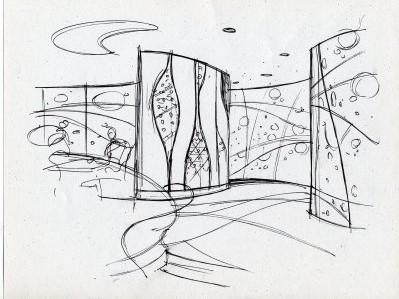 A visit to the HKV turned out to be a pleasant surprise…like the one of having found a pearl unexpectedly while traversing through what one had taken as a pile of garbage for long.

A small urban village with a beautiful monument and huge water body and a deer park, by sheer luck or accident didn’t die a ‘natural death’ often assumed and facilitated by the well meaning planning processes of a growing city…

This place has some how, not only survived the slaughter but has also retained itself as a hub of a vibrant subculture. Whether it was a group of aspiring niche designers ‘fraternity…a fewer landlords to deal with or the Land ceiling act… whatever factors come together serendipitously…have now led to formation of this ‘alternate cultural zone’ nestled into an old village within the mega city of New Delhi.

Narrow lanes, labyrinthine ,interconnected masses of ‘cell-like’ residential units small and human in scale, have now been converted to shops, boutiques, eateries, studios of a special kind: catering to a niche market alright,  but a niche that’s not completely elitist,  BUT has this inclusive accessible sense to it. And what really creates this inclusive sense is something worth figuring out.

What lends this place its special quality is its famously known “dense urban fabric” which is still intact. “Fabric” as a word best describes this human environment because there used to be this sense of ‘weaving’, in the way traditional societies built earlier. This is completely amiss in modern urban development in general, producing ever more alienated neighborhoods in particular…with the new habitations like Gurgawan epitomizing this alienation just a few kms away.

A designer’s haven as it seems to be growing into, alongside regular commercial zone, has very well adapted to the tightness and intimate space and movement network this old village seems to offer. The experience of moving through this new kind of urban block… (“new” becos of it new appropriations) is one that of “relief” and “surprise”… relief from the overt presence of the automobile, urging one to take a walk or a climb seeking his corner somewhere…or to  discover something new, something unexpected.

These new commercial occupants exist in a harmonious co- existence with the old village houses whose residents are often even found guiding and facilitating a new lost visitor to his destination. You could be looking for a sign leading to a garment boutique  which to your surprise  will be accessed through a narrow descending street for eg. barely allowing a single person to walk through. Then suddenly opening out to a lakeside edge, to find a tucked in  boutique  which is unique in its spirit by being a pop-up.  From thereon ,another narrow stairway would lead to the designer’s studios stacked all above, in succession. Or if you were the literary type and were seeking select literature ,you would find the country’s finest niche publication store actually here, echoing the tune of the village by being tastefully transformed into a long linear alley like store that used to be once a throughfare.

In all, allalong an experience of an intimacy haunts you, revealing and concealing, co-existing  in tightness with the other,  making no qualms about lack of space nor frontage or serviceability etc etc. And you wonder if typically our planners and developers have been selling the wrong dreams .

“We the villagers” as now this young fraternity of niche creative people proudly seem to call themselves, have a camaraderie clearly fuelled by the nature of space that surrounds them… If one has a littlest doubt about this, put the same people in a multistorey mall and see if the same sense of intimacy or dynamics exists.

Sharing beyond business, chance encounters, conversations, organized parties, purposeful gatherings are the some of the things thorough which the “urban villagers” seems to have instituted a new kind of culture.    But guess, what allowed that to happen easily..? The “nature of space” creates the mindset and Hkv is clearly an illustration of that.

HKV exemplifies that it’s possible to have a model of commercial urbanization that retains a culture or appropriates a new one. This offers a serious insight and enquiry into the nature of planning processes. What really is of value?  how can that be really retained and safeguarded? How can cities retain a sense of life in this maddening era of mass urbanization over obsessed with infrastructural facilitation?

The place means business but has a ‘spirit’…probably one that is of wanting to seek a “nestling “within the estranged megapolis.