Our House A Creative Lab

We began with the very fundamentals, as house being ones ‘haven’, a private ‘container’ through which one also connects to “elements of nature and neighborhood”.

The house form was boiled down to 2 essential components ie. “a pavilion and a box”, a duality explored programtically and experientially as private /public, open /closed transparent/opaque throughout.

Exploiting the full potential of the site facing an empty green plot and working with the limiting bye laws imaginatively became an overiding concern too.

This east facing plot became a receptacle of sun and sky . It bisected itself in 2 bays:  left side being a box towards the ‘hot south’ and right side being the open pavilion along the ‘cooler north’.

The ground floor was visualized virtually as “emptying itself out” allowing a large OPEN verandah running from  front edge to end of site as a real “breather” in an otherwise densely built streetspace” Next to this streetside pavilion is a long enclosed hall with 2 compact toilet smartly tucked in the setbacks. These 2 non specific spaces were meant to invite multiple space uses.

This lower zone today functions as a space of creative experiments , where occasional events such as art exhibitions, children workshops, music evenings, poetry readings take place , also inviting neighbours to be uninhibited participants, Its also substitutes as a safe play space for children over the vehicle ridden street.

Form this verandah a stair descends to a sunken courtyard that leads to a cellar space.

The cellar space functions as co-working space for independent practitioners modelled on a vision of mutual tolerance n openness.

Further the front setback doesn’t waste itself but allows a dog legged stair to rise upto the living floor under which tuck a storage for UPS and other useful stuff.

Upper level defines its privacy from street by being “raised and stilted” like a loft to ascend to. The green belt across becomes part of our living room through the use of courageous full high glass and wood doors.

Volumetrically this is the space of drama and liveliness to which all movements connect, a place of sounds & smells.  An ascending open stair to a private studio above acts also as a theatrical stage and a playstation for children within the house.

The adjoining bedroom spaces that belong to the left box also virtually merge into this living pavilion through sliding walls glass panels allowing one to experience the width of the site in a small plot.

The studio on top floor is ones private lab where one is likely to spend the maximum time..This in its making and spirit further lightens itself and serves as the “skyward release” and a space for contemplation.

An attitude of maximum extraction of qualitative space by juggling with bye-laws gave rise to elements that give house its distinct character, such as like long extensions of running built in seats or a metallic roof and living room walls, or the service balconies.

The use of materials and sense of detailing though seemingly is inclined towards a contemporary look is guided by a low maintenance energy concern.

The house across 4 levels feels like a open frame inviting different uses in all spaces , before in time it starts defining its specificities… meant to be  discovered only with living in as well as growing up .

A 2 BHK house, with a mezzanine, 1 work space GF and a basement 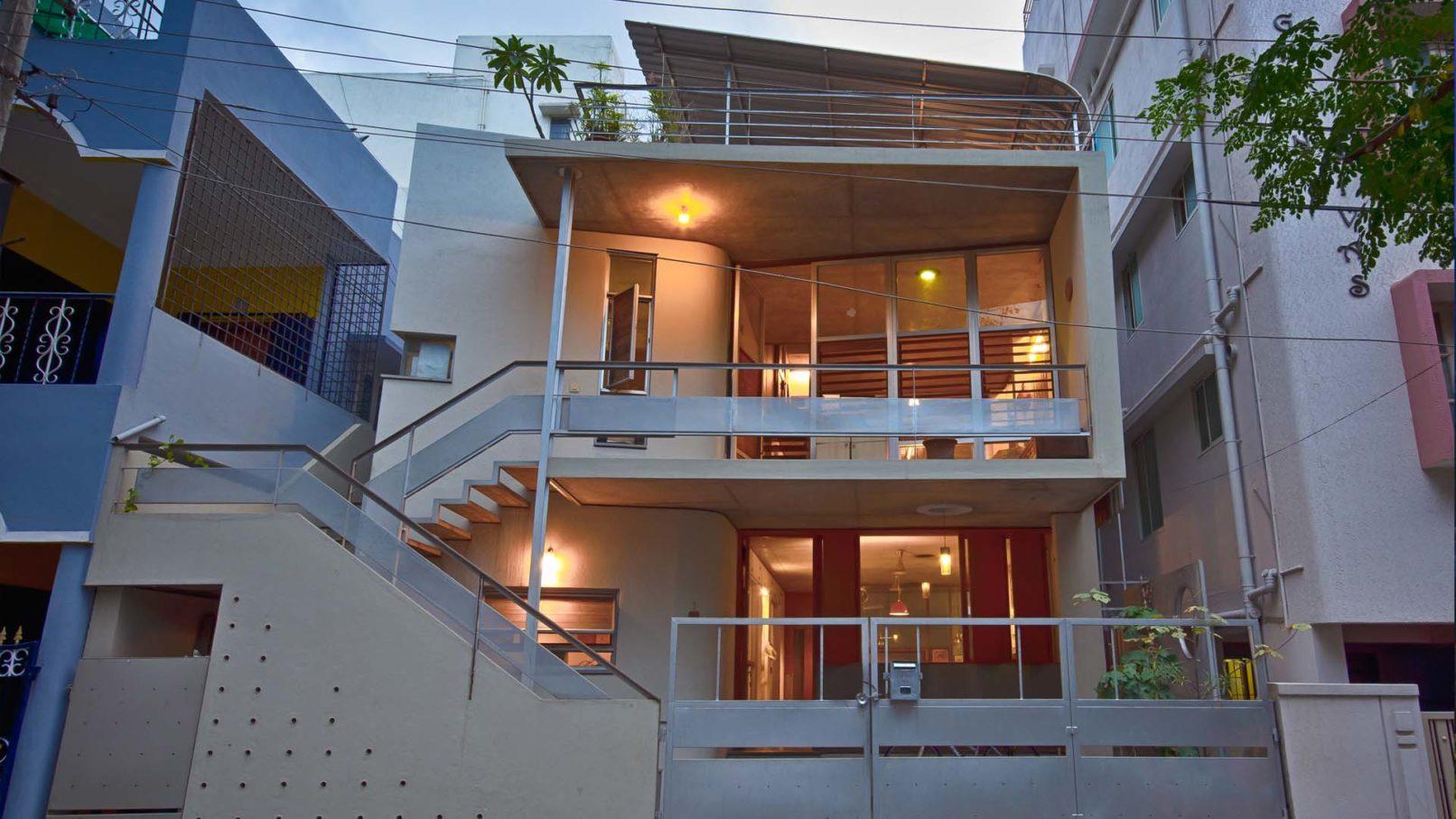 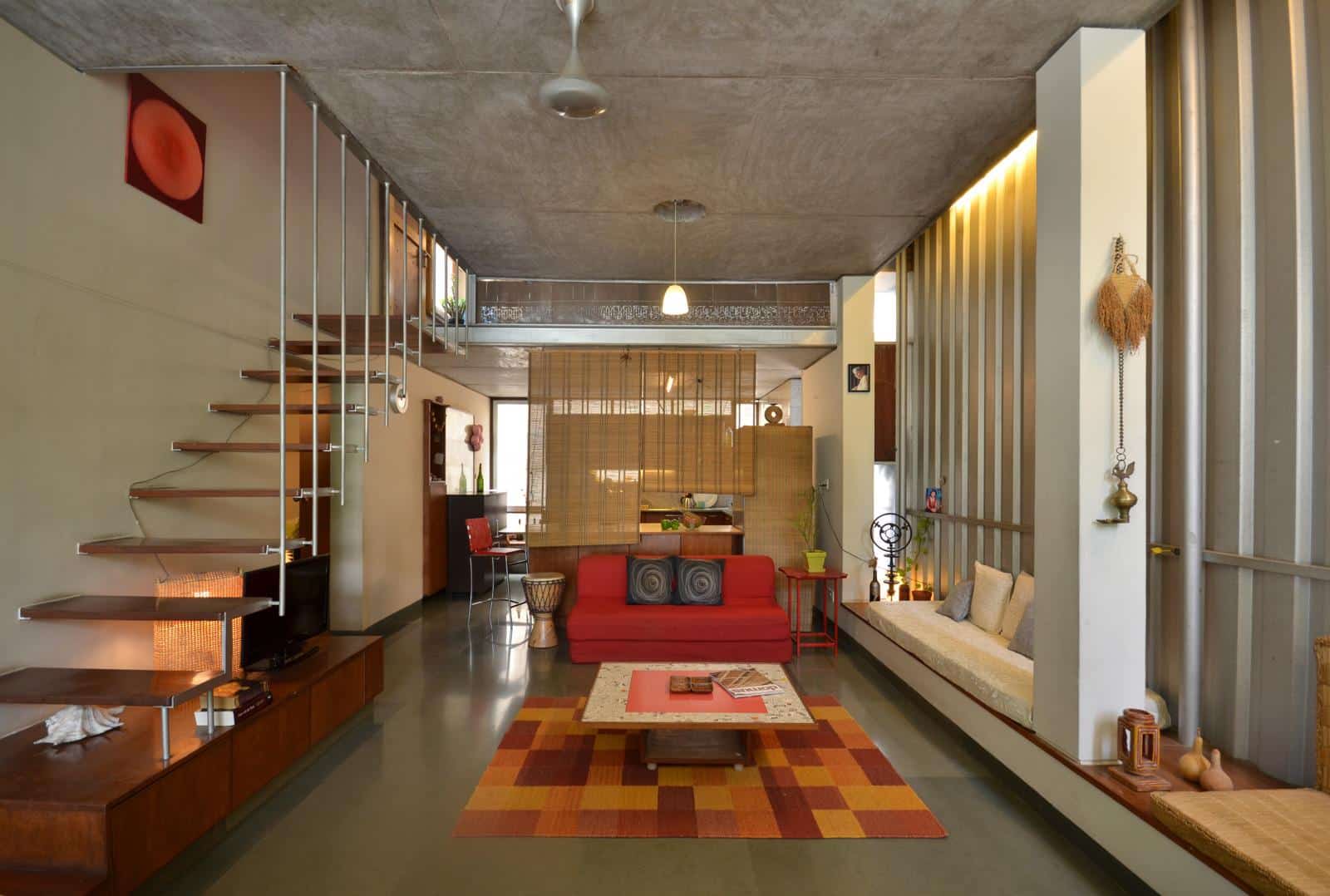 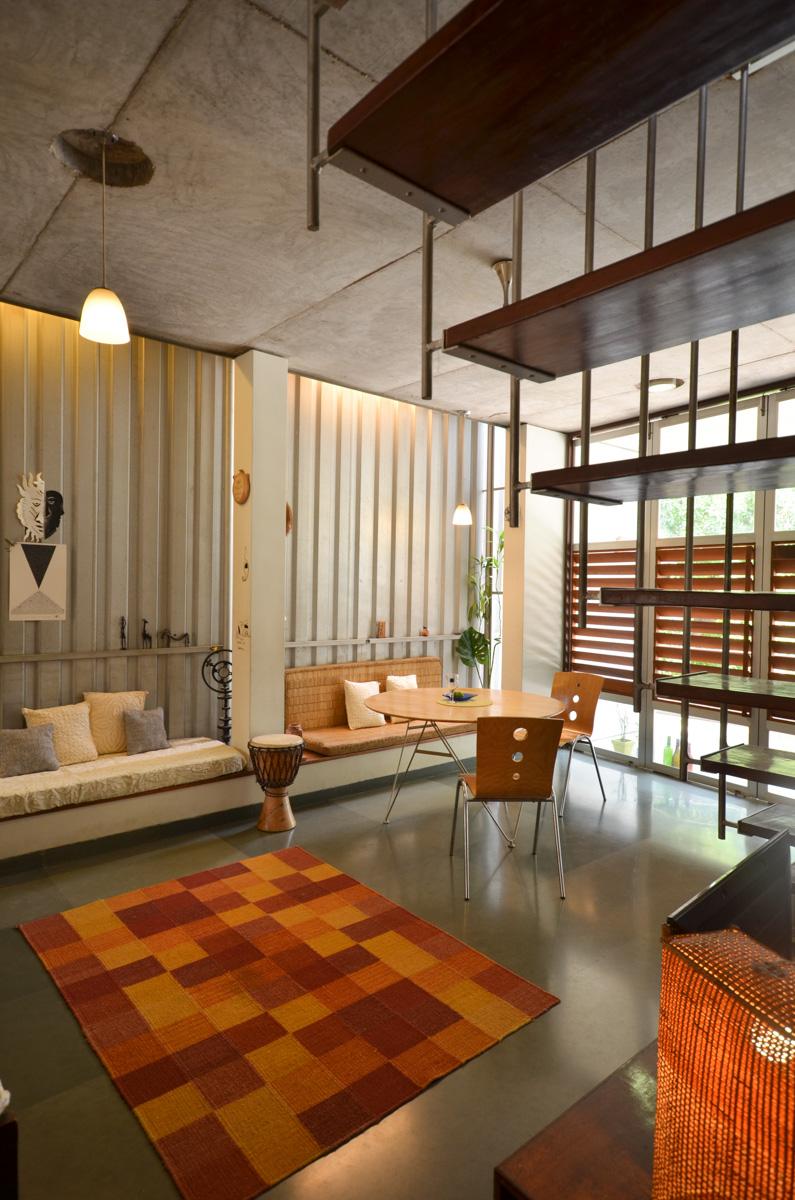 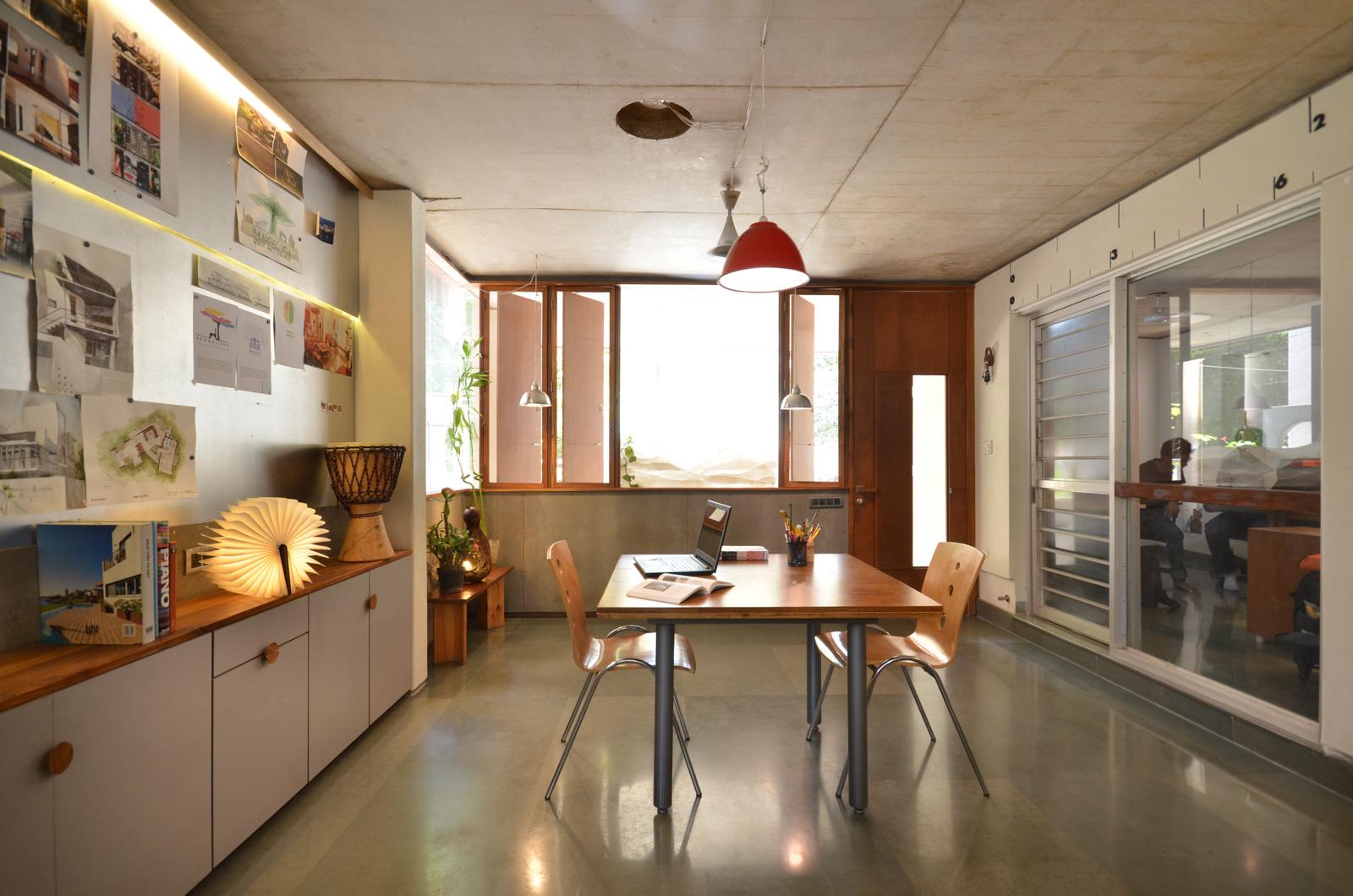 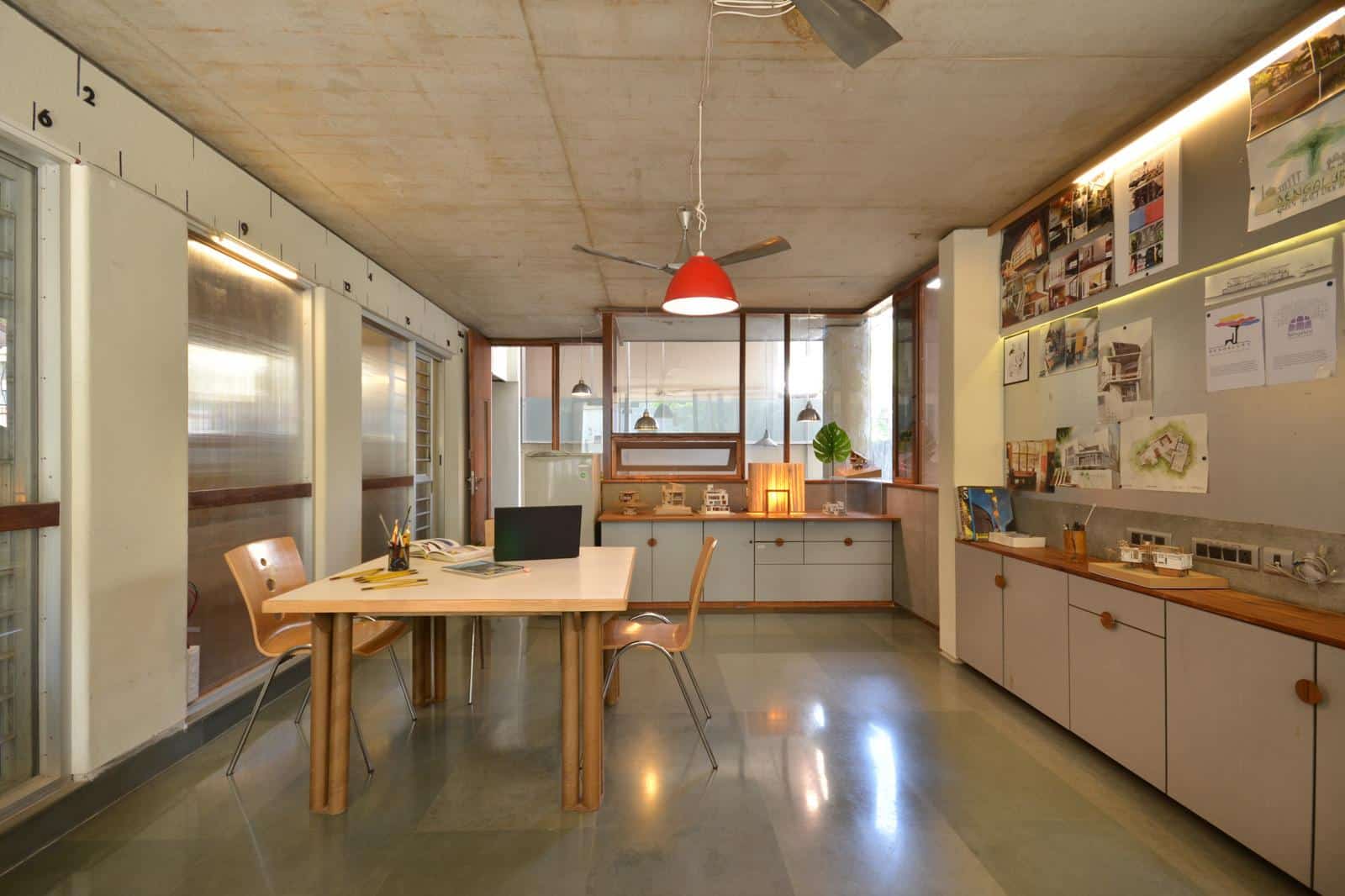 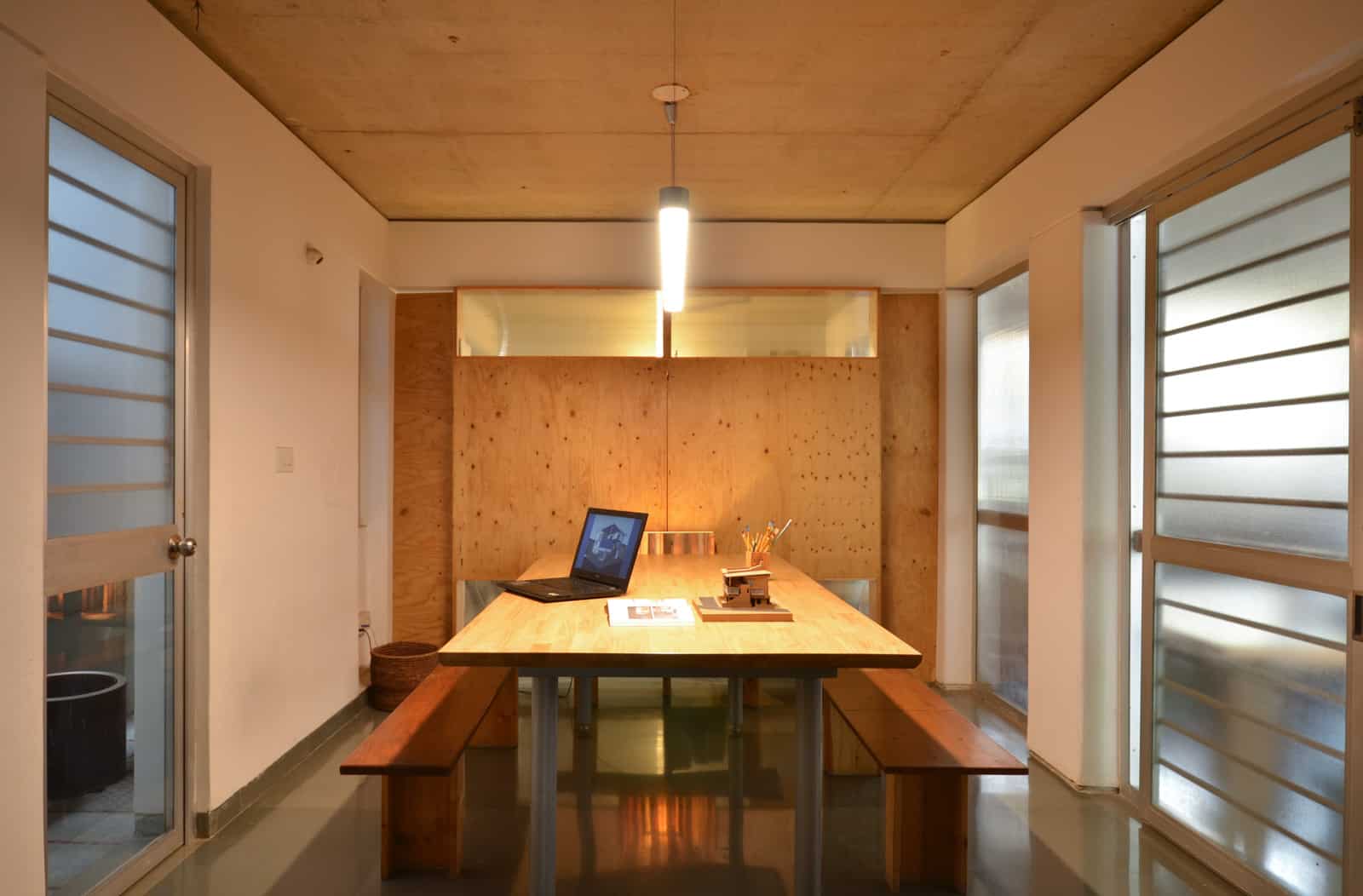