The  land of Hutti is encapsulated with the precious metal GOLD. Hutti Gold Mine is the only active gold mine of India and is enriched with the potential of being developed with a tourism motive. There are many precious historic sites in and around, dating back to Ashokan times. The gold reefs of the regions are the major magnetic pull. Thus, it becomes the right catalyst to devise tourism activities around.

The vision being the development of a place for the public, which would be conceived as essentially a museum park; envisioned as the viable model which invites crowd. The identified site is in the vicinity of a dormant Mine Shaft, called the Grey Shaft. The overall park is like the splash of gold onto the grounds of Hutti, where a museum park is sculpting its own way within. The existing road outlines one of the edges of the selected area.

The museum space is located at the base of the grey shaft in an elliptical form. Further, the form is split and slid past one of the axes, so that the form itself demarcates the spiraling movement of the crowd inside.

The same movement of ‘spiraling in and spiraling out’ is more enhanced by a gentle ramp running peripheral to the museum’s inner wall. It itself is one of the exhibition spaces.

It is a completely enclosed space with the top skylights to imitate the subterranean experience. The tiny top lights allow for controlled light inside and thus maintains the enclosed feel for all. The pit like exhibition area is surrounded by a series of round columns, accentuating the coiled movement, in an elliptical field. From the arrival, a straight flight, adhering to the curved wall, leads to the mezzanine floor, which creates defined areas for particular exhibitions.

The presence of the shaft, in dormant situations also arises the possibilities of them, being enhanced as some eye-catching elephant scale experience, enticing the visitors towards it. Such tower like existing feature is redeveloped as an identity gesture, with a viewing deck on top of it to experience the Hubba landscape around.

Further, bringing the same coiling movement to exteriors, a second ramp drapes around the outer periphery of the museum and takes one up to the terrace. A staircase, as a wrap around element , creates a movement loop to the deck above the shaft.

To create that contrasting experience of going high into the sky and then from there travelling through the shaft, deep down within the rocks. This amalgamation of the two extremes, from the openness to confined, from lit to the dark, is the experience that one would achieve through this.

Hutti-Hubba pavilions which are designed as multifunctional open free structures and Central Landscape Arena, Linear Solar Farm, a trench like Geology Park, Amusement park, Mine Auditorium and Art Gallery. These are the part of second phase of the development.

A Gold Mine Museum and Hubba Development 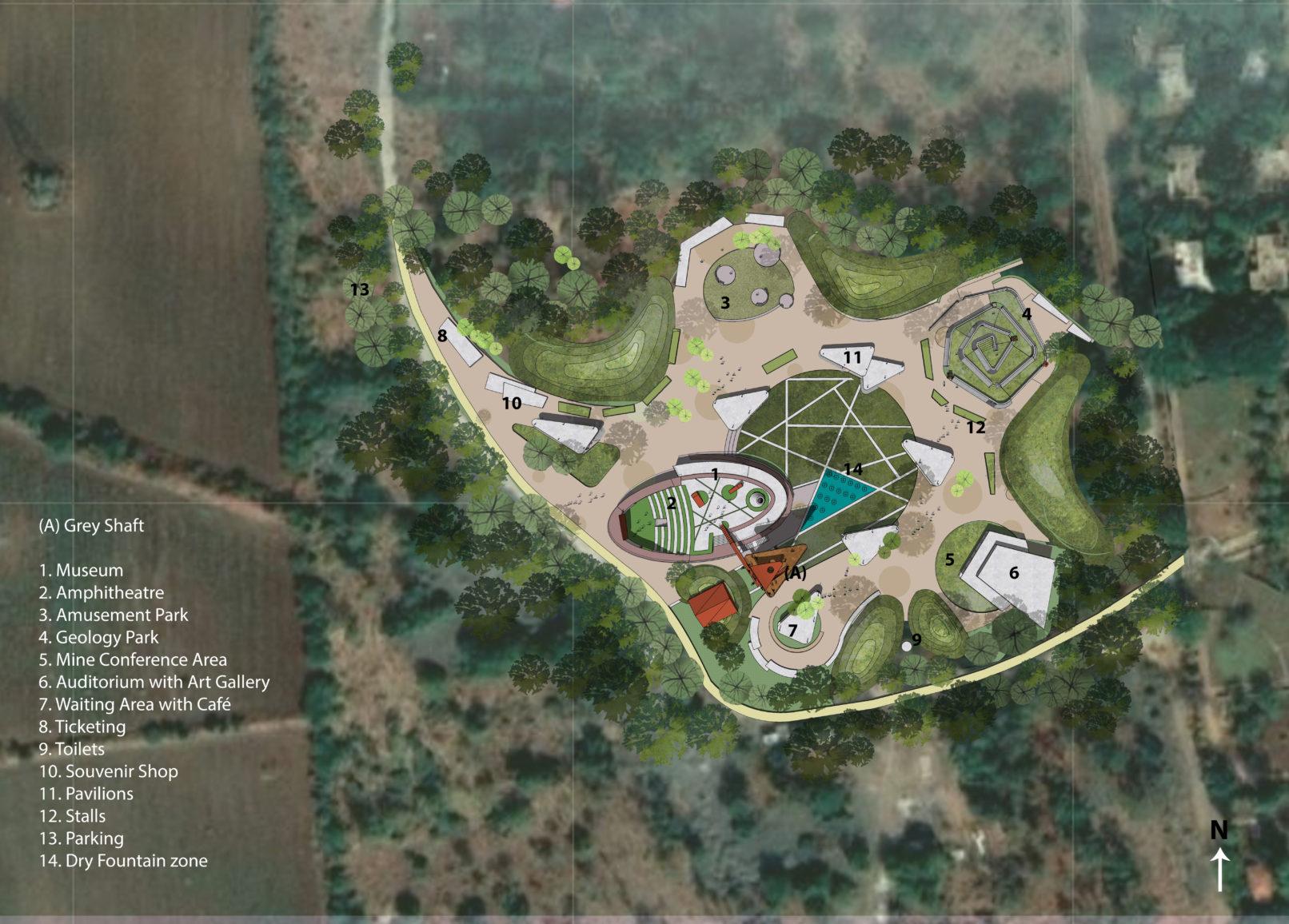 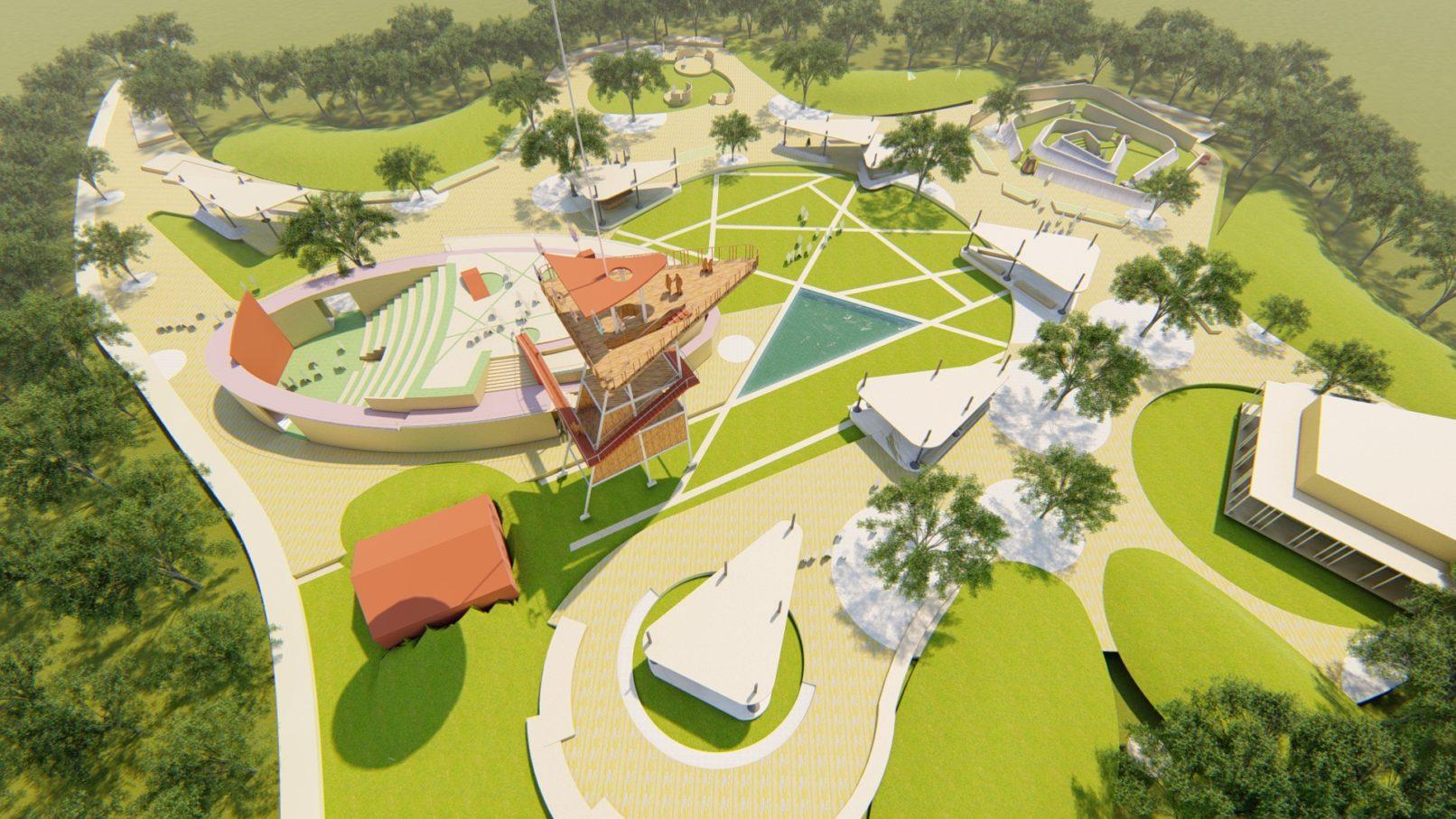 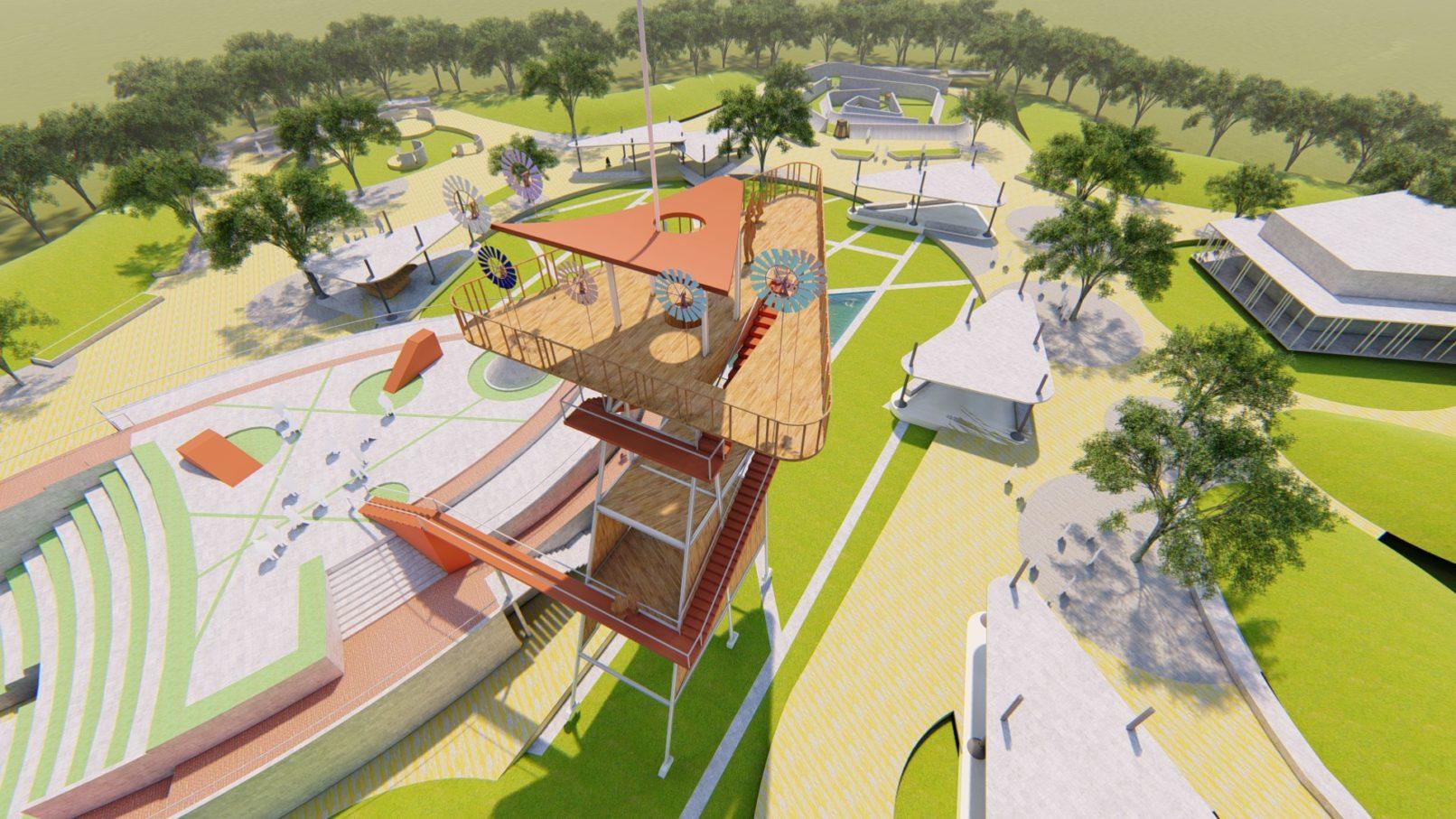 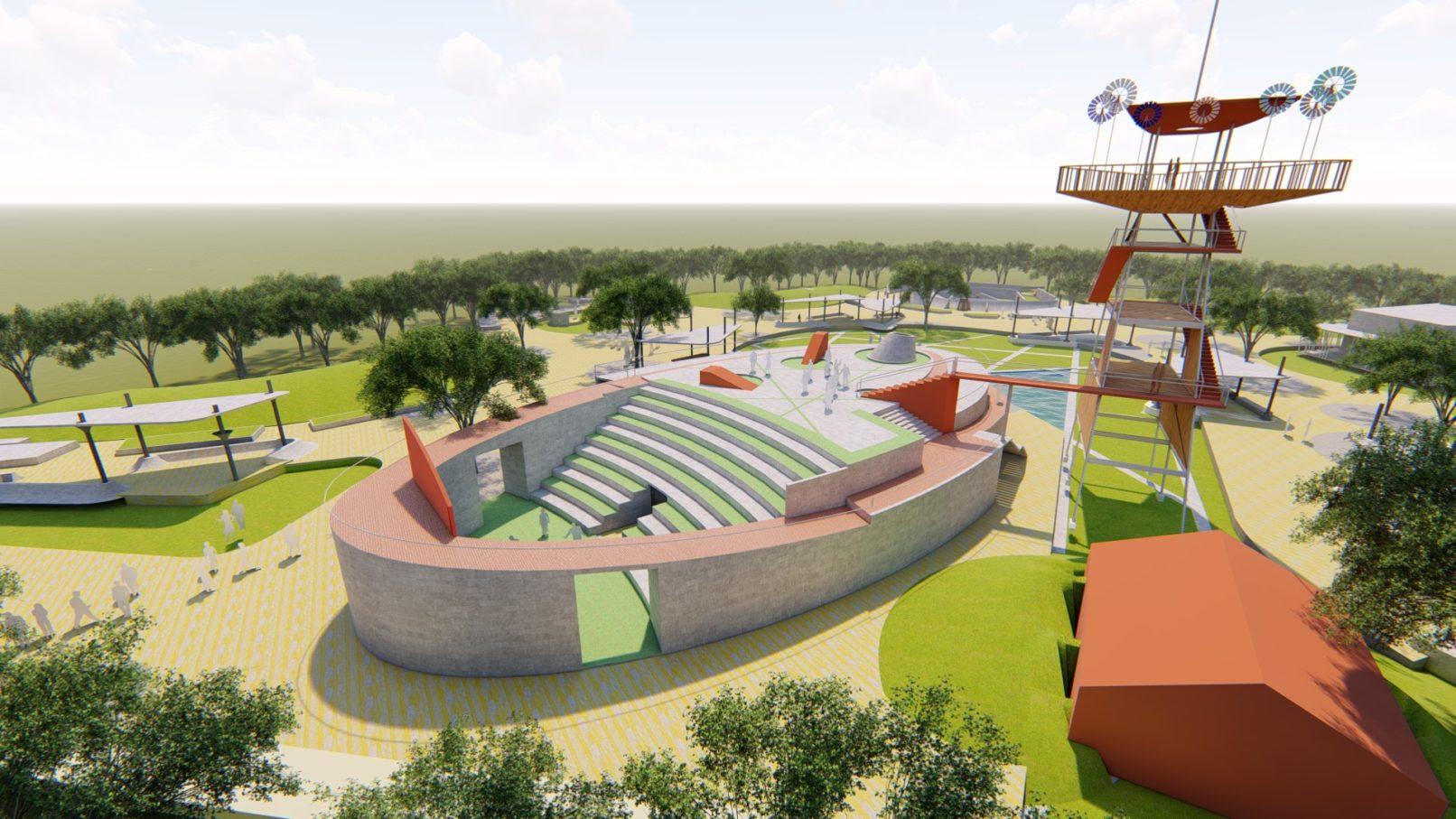 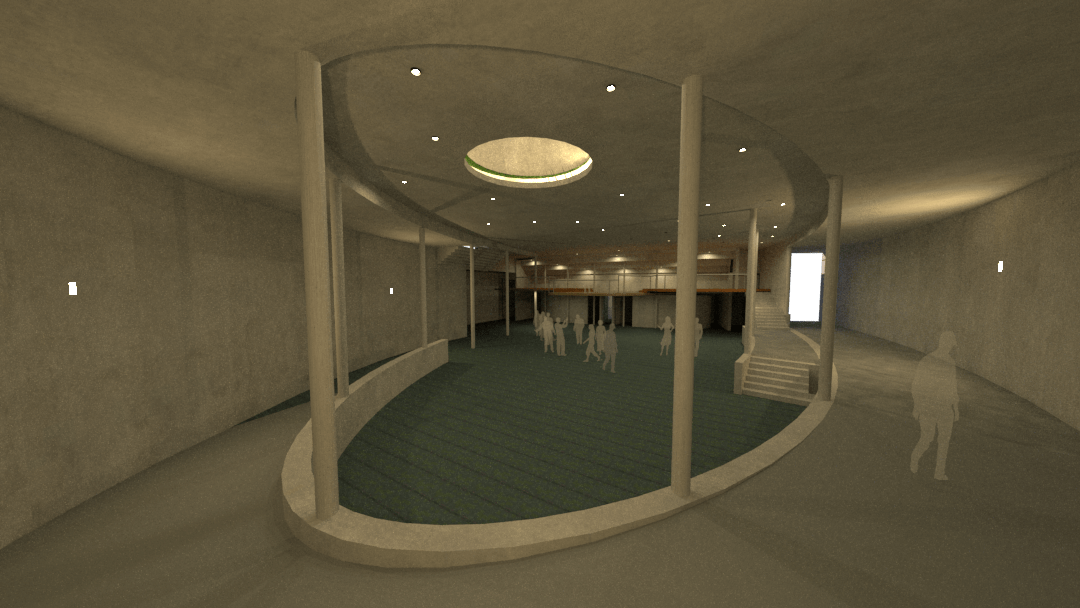 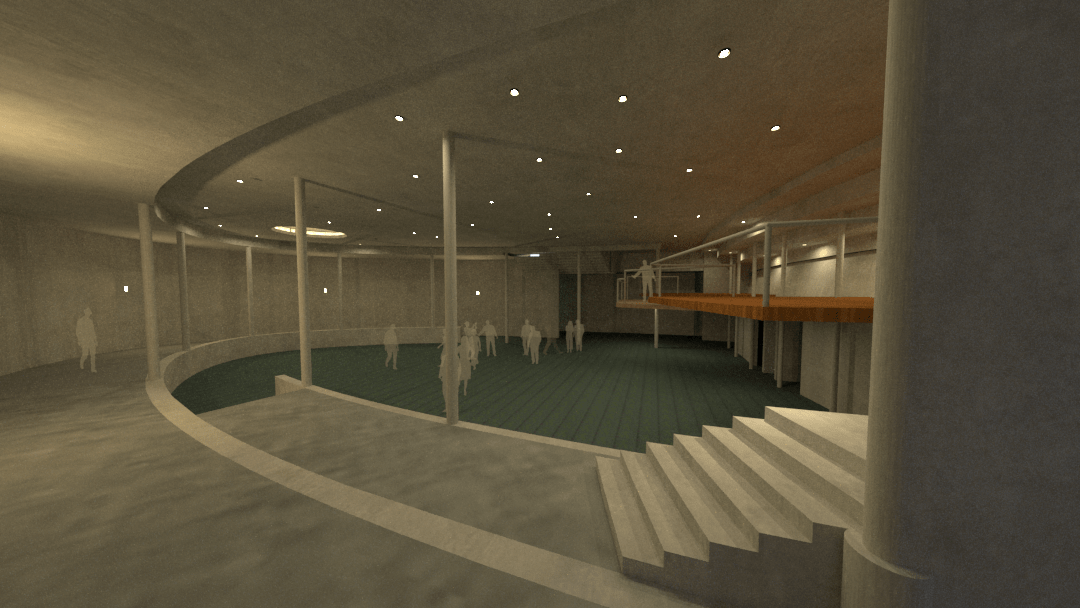